Paul Dano as The Riddler

The recent largescale release of latest big-screen superhero flick The Batman was, without question, a memorable one. For a three-hour cinematic experience chock full of stellar script and screenwriting, haywire special effects and chaotically beautiful acting presences of all involved, the long wait to view a rejuvenated comic book hero in the theatres was well worth it. Now don’t get me wrong…I actually did not hate Ben Affleck’s performances as the caped crusader of Gotham City. However, Robert Pattinson’s undertaking in the role is a welcome breath of fresh air that merits praise for many reasons. And, not only can one examine the story of The Batman through a comic book readers’ lens; but, there is another major aspect of the new film that warrants discussion. (Warning: Some film spoilers ahead)

Robert Pattinson as The Batman

The inclusion of a true crime, CSI-esque storyline involving a serial killer figure in the form of notorious DC villain ‘The Riddler’ is a different type of take on the oldschool comic book formula; a new lens, if you will. Long gone are the goofy aesthetics once present in the Batman universe of old. Those tropes are now in abandonment in favor of a Bizzaro ‘Dexter’ sort of style with Paul Dano at the helm. Actor Paul Dano is a fresh face to the DC world who I’ve noticed before in numerous non-superhero/supervillain roles ranging from an ambitious teen in the comedic Little Miss Sunshine to more morbid territory as seen here. His overall presence and charismatic acting is night-and-day in comparison to Jim Carrey’s Riddler role in 1995’s Batman Forever. Where Carrey was silly and rambunctious (almost comparable to his many other comedy roles), Dano is chillingly manic-depressive, reserved and cunning in his dastardly monologues: a performance that made me forever change the way I thought of serial killer portrayals in movies other than horror. Likewise, his performance convinced me of the intimate hatred that motivates people like Edward Nashton (AKA The Riddler) to terrorize Gotham and antagonize Batman for multiple reasons.

Upon getting my initial taste of what was to come in the teaser-trailer for The Batman, I stood initially skeptical of how the writers were going to develop this type of tale and merge it into a darker sort of comic book fantasy environment, which many have come to think of as rather familiarly playful, if vastly menacing at the same time. Coming off the heels of the Christopher Nolan trilogy in addition to the Arkham videogame series, I believed that I had seen it all at that point. The wayward strategy of Matt Reeves and his drive to make the character and his surrounding world even darker seemed daunting. However, once I got to see the way in which this seemingly awkward yet hauntingly normal guy set up different traps, puzzles and crime scenes in intricate ways to taunt our caped crusader hero, I was immediately hooked on the murder mystery purely out of my love for true crime horror stories and serial killer-related media. The Riddler manages to play it off well from the start, with a subtle playing card and a question mark to boot, giving off his fiendish stench and setting up a few hours worth of fun, yet frenzied storytelling from the mind and points of view of two Gotham misfits: The Batman himself and The Riddler.

III. Analyzing the Clues/Putting it All Together

Going further in depth in relation to the clues that comprise Riddler’s epically evil scheme, you’ve got some SAW and Dahmer vibes to boot. There is a particular scene much later near the film’s climax in which the old saying of “show, don’t tell” comes into play quite nicely. In addition to the quirkiness of the enigmatic deviant that is Dano’s Riddler, the detective skills of Pattinson’s Batman character also further work towards the film’s unique blending of themes. In previous iterations of the Batman character onscreen, it was usually either Commissioner Gordon or butler Alfred Pennyworth who would analyze clues and do the type of P.I. work that Pattinson does as Batman here. As mentioned previously, the caped crusader puts the clues to this long-winded mystery all together nicely, with a touch of the usual hardened, heroic approach to combat and use of gadgets that you would see in the Arkham series of video games. 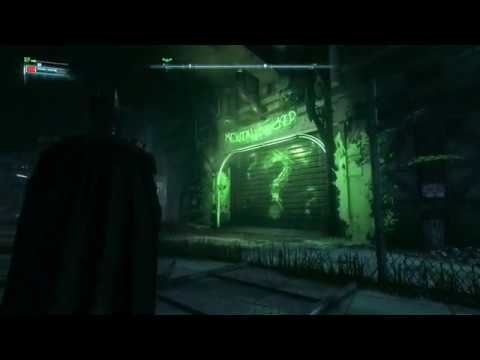 The way that fans, audiences and critics alike reacted to the film and its many tropes has, not so surprisingly, ignited praise throughout the film/comic book/superhero strata. Fans of the comics and previous media related to the Batman character enjoy the new take on the character and on the genre itself, as did I. Critics mostly praised the film unanimously aside from the overly lengthy running time. My stance on this new take on the Batman is that I really enjoyed the true crime aspect that reeled me in from the start. It was a breath of fresh air as opposed to the ’90s films with Michael Keaton, Val Kilmer and George Clooney. Sure, they had some dark stuff thrown in, especially the Keaton flicks on account of Tim Burton’s direction, but those little nuances don’t even hold a candle to the realistic murder mystery onscreen throughout. It’s more gritty and lifelike, making for a more memorably dark atmosphere and brooding viewing experience from start to finish.

The way in which The Riddler is portrayed here, without going into too much spoilers, is that his M.O. (modus operandi) may be attributed to a mix of various real-life criminals that we’ve seen terrorize the world in the past, in addition to some we’ve already seen through different forms of fictional media. I have already mentioned Jigsaw and Dahmer, but some other tropes of this Riddler are also akin to other similar frightful figures such as the Zodiac Killer with the type of disguise the Riddler wears throughout the film, giving me some flashbacks to the 2007 The Zodiac movie that starred Jake Gyllenhaal and Robert Downey Jr. I mean, the Riddler obviously has different kinds of targets in his sights here as opposed to the ’60s California killer, but the disguise is uncanny. That aside, I think the prominence of this new Riddler portrayal could go beyond into the future in influencing the way thriller, horror movie and true crime writers interpret certain kinds of criminals in those mediums. This new Riddler by Paul Dano changes the way in which the character’s demeanor is viewed by fans following the movies. Yes, the comics had some dark stuff on all fronts; but, Jim Carrey’s and previous iterations of the same villain never had the same chilling impact on the big screen.

VI. Why does the inclusion of a killer matter?

I believe that making The Riddler a psychotic serial killer-like character in addition to a genius mastermind aided in creating a ‘taboo’ sort of aura in the world of Batman. Though the film is rated PG-13, there are still many hints of that all-out grittiness from start to finish, especially in scenes involving the movie’s villains. Now, do not get me wrong, Colin Farrell’s Penguin character and Carmine Falcone are fairly intimidating and formidable foes in their own right. However, Dano’s portrayal of the Riddler as a prodigal mastermind and psychotic madman to boot serves as a reminder that not everything is what it seems to be on the surface. The actor’s seemingly mousy outward appearance conceals a sort-of unhinged and unadulterated rage, craziness and subtle, misanthropic disgust of authority and Gotham as well as its superiors. The Riddler in this film seeks to target the ‘real big fish’ of the city in order to seek out his own meaning of justice through his very own means of vigilantism. And that is precisely done through puzzling endeavors, hazardous encounters and deadly mind games that put everyone at risk in the end. Riddler’s inclusion matters in this movie purely out of how realistic his methods of madness, intentions and motives can be viewed as and even comparable to individuals both in other forms of fictional media and even some villainous persons of our own real world history, too. All in all, there exist many reasons to hold up the merits with which have culminated together to make this novel cinematic experience a truly memorable one in the end. You’ve got good ole Batman, you’ve got your classic Batman villains (well, some of them, at least), you’ve got tension and suspense packed in with a score that could easily be comparable to The Dark Knight, and you’ve got a modern murder mystery that ties it all nicely in one brutally blunt package of epic proportions. Yeah, the film’s a rather lengthy one; however, there’s enough of everything to satisfy fans of superheroes, comic books, true crime, serial killers, and more. Matt Reeves’ The Batman is, in essence, a deep dive into the mind of a twisted, conflicted and definitely arguably psychotic murderer who sets up his traps and puzzles a la Jigsaw, acts and thinks like a modern-day Dahmer or Zodiac Killer, and ultimately views himself as Dexter Morgan in the way that he (Ed Nashton/Riddler) truly believes himself to be a vigilante akin to Batman himself by way of his own perceived ideas of “justice through vengeance”. If there was ever a movie that created a disturbingly realistic onscreen villain for the fictional superhero crowd, it’s this one.

View all posts by Dave Raffy →

Let’s Take A Trip To The Toy Store!

Red River Road – What If Everyone Becomes Infected?