BOG is a 1979 (I think?) sci-fi horror (maybe?) that is comparable to the long lost cousin, twice removed, mother’s honky-tonk backwoods broke version of The Creature from the Black Lagoon. GASP!

Starring Aldo Ray and Gloria DeHaven, BOG takes place where dynamite boat fishing in the middle of a swamp is a real thing. This time, some unlucky fella opens the water gates to an angry creature who is out for blood – BWAHAHAHA! 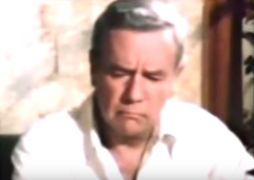 Two couples that I first mistaken as relatives, head to the bog for some beer, camping, and fishing. We get a lot of slightly inaudible banter, alcohol consumption, complaining, and grainy visuals of the four until the monster attacks. Seeing how it went after the ladies, one would presume it just wanted some peace and freaking quiet.
I know I did.

POOF! We are at the office of Sheriff Neal (Ray), and the husbands share what happened back at their campsite. This tale brings forth a search in locating the wives’ bodies. After a preliminary examination takes place, coroner Dr. Ginny Glenn (DeHaven) confirms the ladies’ bodies were drained of blood from their aortas via some organic needle. With the husbands in a tizzy, they run off to buy big guns and take the law into their own hands, only to be approached by the painfully overacted town kook promising to take the two men somewhere for answers.

Hey! It’s Gloria DeHaven as the swamp lady of knowledge!
She informs the men that deep under the dank waters of the bog, a creature slumbers only to wake for feeding. Like a part-time century vamp, the creature sucks its victims dry. Since it was awakened early, it must do so before returning to its wet bed.

Now, aside from the poor composition (seriously, what were these people looking at half the time?) and lengthy babble, the ending in itself is a delight. It’s every synonym of the word ‘ridiculous’, with a monster that looks like nothing more than a tall man-fish wandering the woods. I’m quite partial to the eyes.

Sigh.
I really needed that laugh.

View all posts by MissToxicLocket →

Screening of ‘THE SHINING’ Where It Was Filmed In Oregon!

Back From Hell arrives on DVD May 31st from Bayview Entertainment

Things From Another World!